This March popular website Giveaway of the Day (often abbreviated GOTD) http://www.giveawayoftheday.com/ offered to its visitors install and test COVERT Pro. According GOTD, the program has been downloaded 23,405 times in 24 hours.

Our program was discussed on the forums in several languages. By number of comments COVERT Pro is far ahead of other products on this site

About 72% of visitors liked Covert Pro. According to this index, COVERT Pro has long been ranked first on this popular resource.

Here are some comments left by visitors to the site http://www.giveawayoftheday.com/:

• Have to applaud the developers for trying a different approach to computer protection, something has to be done as far too many critical systems are open for abuse.
Comment by XP-Man — March 18th, 2015 at 7:04 am

• I would like to thank CovertPro for the give-away, and more importantly their assistance in these comments, without which I may not have downloaded the program.
Comment by Peter — March 18th, 2015 at 9:02 am 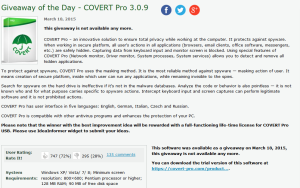